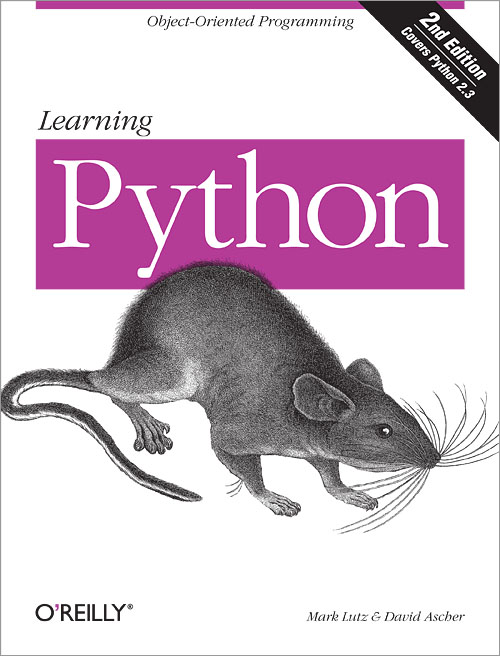 A 2nd Edition of the book Learning Python is in production, and will be available soon. I submitted a full draft of the new core language material on January 9th, and finished a final draft on June 9th (and a final final draft on July 6th). The book went to production in the first week of September, which means it will be released in late 2003 (December).

This new edition has been expanded to cover all the new features of the Python language added in the last 4 years--list comprehensions, nested scopes, new style classes, generators, string methods, and so on--and reflects the current Python release, 2.3. It will also cover new topics and examples presented in Python classes I teach.

As a result of all the new coverage, the book will likely grow by 150 to 200 pages in this edition, and be a more complete guide to the Python language. Despite the new material, it retains most of the 1st Edition's scope and flavor, and is still designed to be a first book on Python for both new and experienced programmers.

O'Reilly's description page lives here. Naturally, you can also find a catalog page for the book on amazon.com by doing a search; be sure to look for 2nd Edition details at that site.

Feb-05: I've posted a new book updates page for this text. This page is a collection of notes about things omitted from the text, changes in Python after the book's publication, and a few errata that have surfaced over time. The official errata (book bugs) list, however, is still maintained at O'Reilly's site. This new page is mostly for author notes, and serves as a sort of appendix to the book.

Feb-04: O'Reilly published an article I wrote titled "When Pythons Attack", which summarizes common Python programming mistakes, and is based in part on content from this book. It's available on this page

Feb-04: O'Reilly is now maintaining both source-code and an errata list for this book at their site. Source-code for examples and exercises is available here. The errata (corrections) list lives here. A separate book updates list may eventually appear here as well.

Jan-04: This book hit #1 on the computer books list at bn.com (Barnes & Noble) in January. It was also #2 on the O'Reilly bestsellers list for two consecutive weeks in early February. At the time that I stopped checking, it had been in the top 10 there for 3 weeks, and in the top 20 for 5 weeks.

Jan-04: This book started shipping as of the last week of December 2003, and is now available. I first saw it when amazon.com shipped a copy to me on December 29.